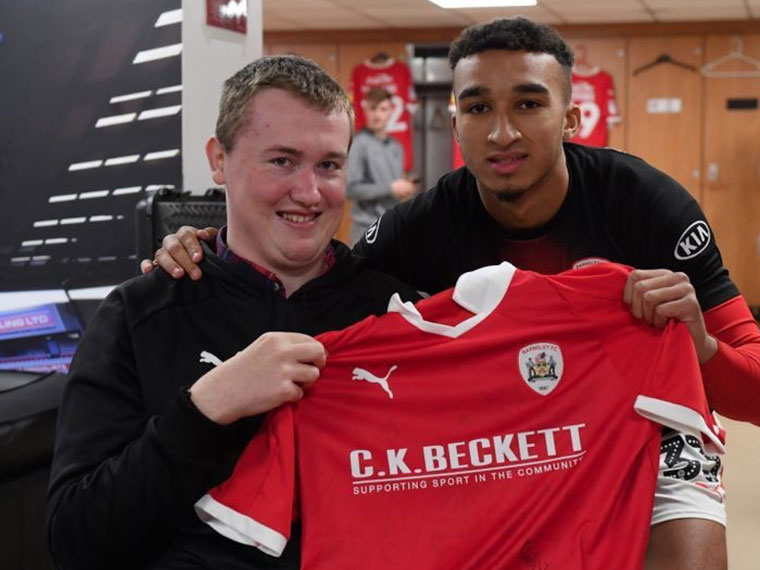 Level 1 IT student Elliot Turner was recently inspired to achieve one of his childhood dreams and become the mascot for his favourite team Barnsley Football Club.

Elliot told his Learner Support Assistant Amanda Siddons that his number one dream was to walk on Barnsley Football Club’s Oakwell pitch. Having central motor disorder and often relying on the support of a wheelchair for mobility, Elliot initially resigned himself to never realising this dream.

Elliot said, “I said that, because of me being in a wheelchair, I couldn’t do it. Amanda told me to never say I can’t do something.”

To Elliot’s surprise, Amanda and Lee Bowes, Lecturer in Business and Digital, arranged for him to realise his goal and become a mascot for Barnsley Football Club. Elliot is a huge fan of the team and has been going to all their home matches, and some of their away matches, for the last twelve and a half years.

Elliot found Amanda’s advice to never give up ‘inspiring’ and decided to exercise to help improve his fitness and mobility.

Elliot added, “I thought Amanda’s advice was really inspiring and I’m now going to the gym every Monday and Thursday. I use the treadmill, bike, and do rowing machine exercises for my arms too. I think that this exercise and Amanda and Lee’s support has really helped build my confidence”.

Amanda has worked with Elliot as his Learner Support Asisstant since he started at Dearne Valley College four years ago. She said, “Elliott is a remarkable young man; to see the person he is growing into is amazing to see. From the moment he knew he was going to be a mascot his confidence level has grown massively – now nothing is unachievable to him!”

On January 12th, Elliot fulfilled his ambition and was the mascot for Barnsley for a home game against Bradford City on the Oakwell pitch. He was greeted by all the players, walked on the pitch with the match ball and received a signed Barnsley FC shirt.

Elliot’s IT tutor, Lee, said, “For Elliot to meet the players meant so much. He was so excited at the prospect, it motivated him to practice his walking so that he could meet the players without sitting in his wheelchair.

“All the staff were absolutely delighted for Elliot to realise his number one dream. Barnsley Football Club were absolutely fantastic and this is why they have a special place in our community.”

To see our range of IT courses click here