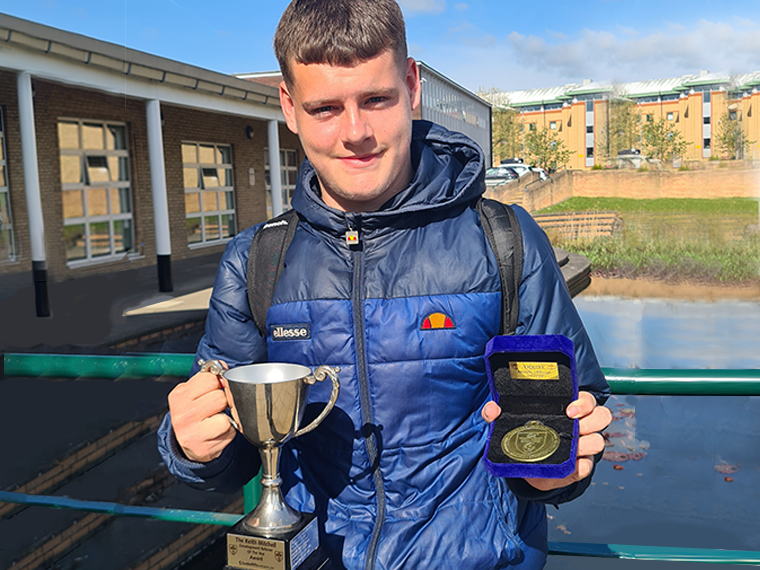 “Runs in the family” is a well-known phrase. Typically, it refers to a career choice that multiple family members have taken up, similar to the phrase – “followed in his father’s footsteps” Well that is certainly the case for Level 2 Sport student Declan Doyle, although it was actually his uncle, whose footsteps Declan is following in.

Declan spends much of his time outside of College working as a referee, officiating many games between local football teams. Recently completing his Level 6 FA Refereeing Qualification, with the aim of achieving his Level 7 Qualification, which will allow him to officiate County FA games across the country.

He hasn’t stopped there though, as well as his many qualifications, Declan has won multiple awards. Recently being awarded Development Referee of the Year for Doncaster and District Juniors Sunday Football League.

Declan explained how he started refereeing, Declan said: “When I was younger, my uncle worked as a Referee, and suggested I give it a go. You can’t officially begin training until you’re 14 and I was only 11 at the time, so I had a few years to wait before I could start.”

He continued: “Before my 14th birthday, my uncle gave me my first refereeing equipment and let me referee some friendlies. I started the referee training, and having that previous experience, even though it was just a few local games, really helped me with the training, which I quickly passed.”

Declan started by refereeing under 8’s games, before progressing on to under 15’s. In total Declan has refereed over 100 games since he started, averaging 5 games on a typical weekend.

Declan went on to say how he’s progressed onto officiating his first under 17’s game and beyond.

He said: “I actually found it easier to ref the higher ages groups, I was nervous at first as I’d never done it before, but after finished the first game, my confidence quickly grew. I’ve just started officiating men’s football more than the junior leagues.”

“Earlier this year I was contacted by Doncaster Football League who told me that I had been selected to referee some of their games. I refed a few of their games and was told that I was in the running for Development Referee of the Year, which was a big shock, but I was also very proud to even be in the running. I found out later that I was actually the youngest person ever to win the award.

“I’ve always received a lot of praise from everyone, it’s really great to be acknowledged and receive recognition for all the hard work, time and effort I’ve put into this.”

Be sure to check our news pages for all the latest news and events happening around College.

Learn more about the Sport courses we offer.