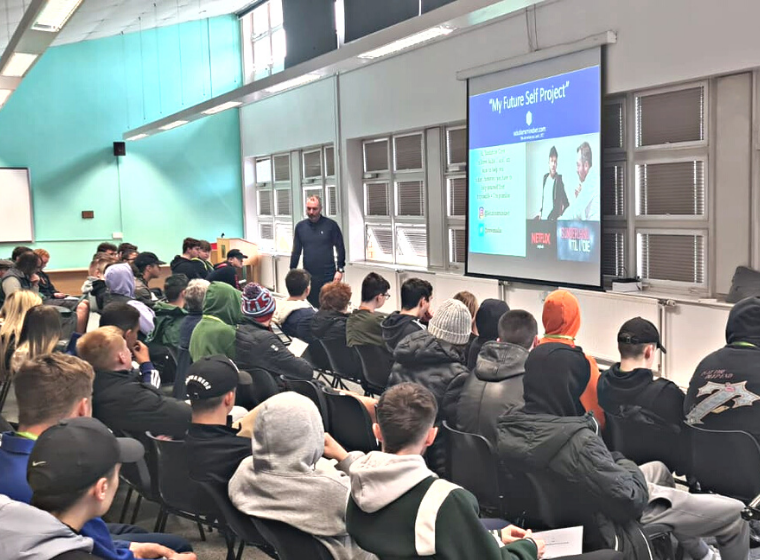 There’s much more to studying at College than gaining new skills or fresh knowledge. Your time at College is about understanding yourself and figuring out who you are and where you want to go in life.

Forging your own path, when there are seemingly countless career paths and endless possibilities can sometimes be overwhelming. To help students with this, Dearne Valley College invited a series of guest speakers from a range of different industries and backgrounds to speak to the students as part of Inspire Week.

Famed author of ‘Educating Football’ and founder of Solutions Mindset Steve Sallis, kicked off the week on Monday, before Oliver Newton spoke to the students on Tuesday, about his inspirational battle with Obsessive-Compulsive Disorder (OCD), anxiety and depression.

Steve Sallis spoke to students about ‘My Future Self’ where he wanted students to start thinking whether their future selves would thank them, for the decisions they make today.

He said: “I aim to empower the students to have more control over their decisions, by making them think about how their future self might react to decisions they make today.”

He continued: “Today’s talk was based around the lens, what I mean when I talk about ‘the lens’ is how we perceive the world. I’m really passionate about understanding that everyone sees the world differently, and we all interpret things differently to ensure we avoid conflict or cost.”

On Wednesday, Leonie Lightfoot from Chimp Management, inspired the students as she spoke about the importance of understanding your own mind, especially as a young student.

Finally, the week was rounded off by Positive Psychologist, Martin Burder, who spoke to the students about the science behind happiness, positivity and success, and how students can help each other with the right mindset.

During his talk, Martin referred to a £5 note, he screwed it up, stepped on it and then asked the students if anyone wanted it. Level 3 Computing Student Andrei Stanca raised his hand and responded with the perfect answer, he said: “No matter how downtrodden and dirty it gets, it still has value”.

Martin then awarded Andrei with £5 for being brave enough to positively contribute to the conversation.

Afterwards, Andrei said: “I wasn’t feeling great this morning, I was lacking enthusiasm and motivation but after the extremely positive response I got from everyone, it made me feel good – it truly affected me, and I hope it affected everyone else positively too. I really enjoyed today’s talk”

All of the guest speakers will be spending the next four weeks doing one-on-one sessions with students across the College to help them set up clear goals and aims in life, looking to create a bigger, exciting future for them.