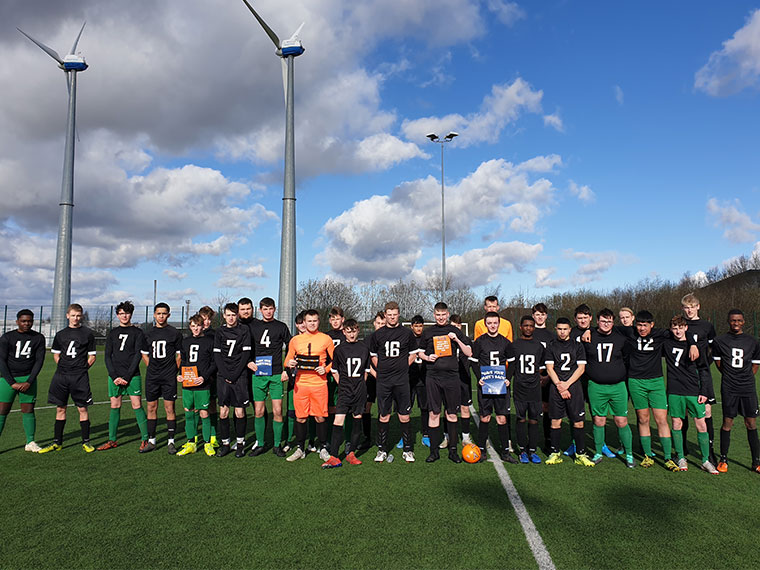 Dearne Valley College and Doncaster College have kicked off their collaborative effort to raise mental health awareness with a friendly football match.

Ashley said: “I’m delighted to have a fixture between ourselves and Doncaster College. We’re hoping to use this as an opportunity to raise awareness on mental health in sport and as a whole.

“As a College, we’ve been aware of the importance of mental health in sport and education and this felt like an engaging approach to the subject that would boost learner involvement. The English Football League have partnered up with the mental health charity Mind and premier league football teams are getting involved too.

“One in four young people suffer with their mental health so it’s a lot more common than some may realise. It’s important to us and to those affected for all to know that we’ve got each other’s backs.”

Gavin said: “This isn’t the first time we’ve been to Dearne Valley College. Coming here is great; we get to use the pitch and time to train with another college and set ourselves up for future games. It also allows us to assess other team’s skills.”

David added: “This kind of effort highlights that football isn’t just a team sport; it’s an environment which allows people from different courses to come together and work toward a common aim.”

Level 3 Sports learner Blessing Moyo was one of the competing players on Dearne Valley’s team.

Blessing said: “This game is about raising awareness regarding mental health. A lot of people suffer with theirs but don’t like talking about it, so this is another way of showing everyone that it’s completely fine for anyone to talk about their mental health.

“My advice to anyone having a difficult time with their mental health is to stop hiding any issue; it won’t go away on its own. Talking about it sets you free. Everyone’s looking out for each other.”

Find out more about our Sport courses.