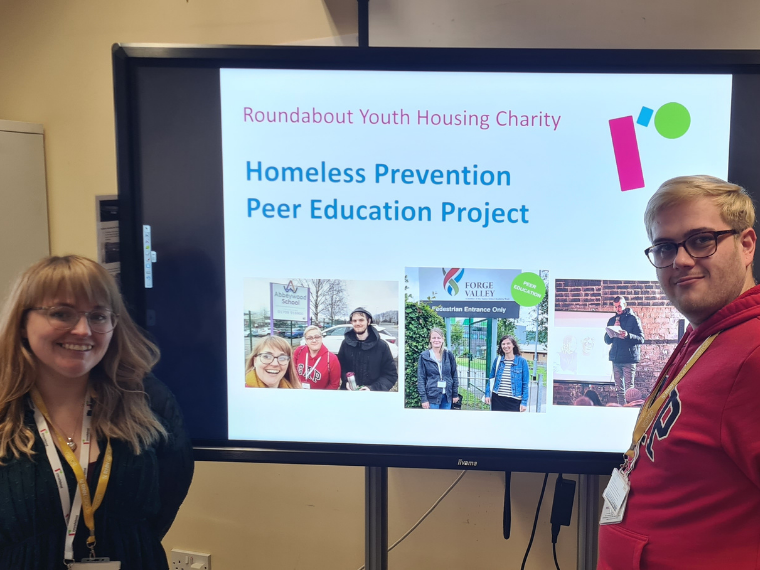 Recently Dearne Valley College welcomed Sheffield-based homeless charity Roundabout to the College. Representatives from the charity, spoke to students from our Childcare, and Hair and Beauty courses about the many different issues surrounding homelessness. In an effort to raise awareness about this growing issue, and to let the students know that if they or someone they know, may be experiencing homelessness, Roundabout can help.

Roundabout is youth housing and homelessness charity, working across the Sheffield and Rotherham region.

Peer Educators Skyler, Hayley and Aaron spoke to the students about the services and support that Roundabout can offer, such as housing support as well as employment and education opportunities to people aged 16 to 25.

When asked about the importance of discussing the issue of homelessness to College students, Sklyer said: “It’s a really important issue because a lot of young people may already be experiencing or could experience homelessness at some point in their lives. It’s not a topic that’s discussed openly enough, there isn’t enough awareness of the issue.”

He continued: “Homelessness doesn’t discriminate – people from all walks of life, can suddenly find themselves homeless.”

Hayley added: “It’s important for us to raise awareness of this issue to students as it’s very common for people between the ages of 16 to 18 to want to move away from home, sometimes due to issues at home. In these cases, they may need support with that having not yet secured employment or finished education, it can be a very volatile time for young people, where they need support, especially if they’re not getting it at home.”

Roundabout works with a lot of homeless people across the region, many of whom share their own stories about how they became homeless. Skylar and Aaron have both been homeless in the past and shared their stories with the students. They were asked if they found it difficult to talk about their past experience of homelessness, having to recount their stories with the aim of educating young people.

Skyler said: “I used to find it difficult when I first started, some people don’t take such a sensitive subject very seriously. But the more I stood up in front of people, it just became easier until it became natural for me.”

During their presentation, they discussed the wide range of reasons that people become homeless. With the number one reason being family breakdowns, this is often paired with drinking or drug problems within the family.

Hayley commented: “I’ve also seen a number of young people who have entered into relationships, moved in together then the relationships has ended for some reason, leaving one person with nowhere to live”.

Skyler said: “Having experienced homelessness myself, I can definitely say that it has an impact on a person’s mental health. Moving from hostel to hostel, having everchanging keyworkers that didn’t offer me any support, eventually led me to having a breakdown. Thankfully Roundabout offered me the support I needed and helped me get accommodation”.

Hayley added: “Mental health is often a contributing factor to homelessness, and of course being homeless will certainly impact on a person’s mental health, even to the degree that where there may have not been any mental health issues previously. The experience of living on the street, having no safe accommodation and having to deal with all of that can definitely lead to mental health issues.”

Finally, the team were asked what advice they would give young people to minimise the potential risk of becoming homelessness.

Hayley said: “The most important thing to do is to seek help as early as possible, as soon as there’s a problem at home, or an issue that may cause you to want to leave home, get in touch with Roundabout. We have a huge amount of resources available for young people and lots of connections with other charities that may be able to assist too.”

If you or someone you know is experiencing homelessness, or for more information about Roundabout and the services they offer visit the Roundabout website.