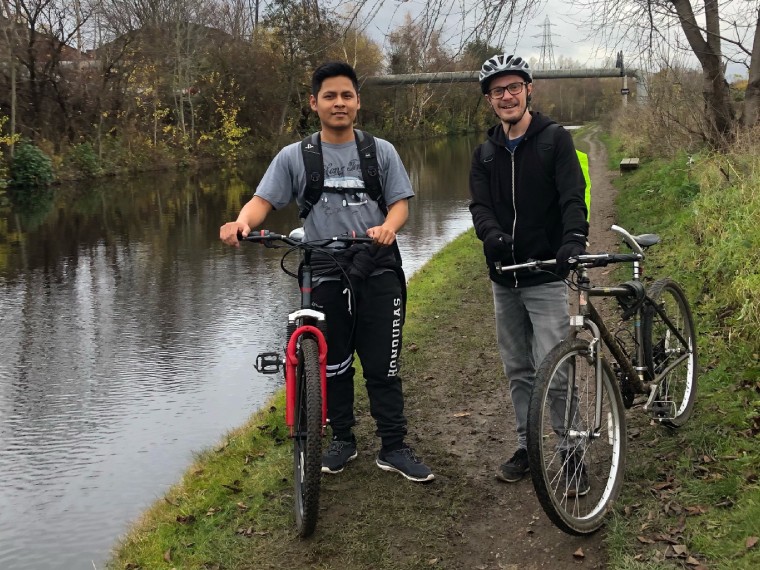 Dearne Valley College Learner Recruitment and Reception Officer Simon Beech and Rotherham College (part of RNN Group) student Marlon Perez are preparing to pedal coast-to-coast to raise funds for Hondurans whose lives have been affected by Hurricanes Eta and Iota.

The determined pair, who became friends through College, are cycling the Trans Pennine Trail from Southport to  Hornsea. The pair’s mammoth mission will take five days to cycle and the date will be confirmed once local tier restrictions allow the two to begin. In the meantime, the two are looking at cycling the equivalent miles of the trail in their local areas.

Honduras has been battered back-to-back by Category 4 Eta and Category 5 Iota, which combined have taken the lives of 200 Hondurans, with hundreds more missing. With 3.9 million people affected by landslides and floods, and 154,000 sheltered as 70,000 homes are damaged, the powerful storms have taken their toll on the Central American’s people and infrastructure.

Simon mentioned: “During the lockdown, I got to know Marlon. We struck up a friendship as I’ve spent time in Latin America and speak Spanish, so he helped me with Spanish and I helped him with English.

“More recently he told me about the hurricanes in Honduras which I’d heard a little bit about. In Marlon’s home town, which translates as ‘Pepper’, an important bridge has been washed away.

Simon added: “I’ve always wanted to cycle the Trans Pennine Trail and thought this could be a good cause whilst at it. I mentioned it to Marlon and he was happy to join.”

Discussing how his training was going, Simon noted: “I’ve been practising; recently I managed a 34-mile cycle in one day. I’m getting so used to it now that in the evenings when I’m trying to watch TV I’m having restless-leg syndrome where my feet are twitching to push my bike around some more!

“Marlon’s also pushing himself – today he’s cycling from Rotherham to Doncaster and back. I’m proud of his commitment to his country and his efforts to help better the lives of people in his hometown – even as he lives thousands of miles away.”

The pair have placed an ambitious goal to raise £10,000 to help the people of Marlon’s hometown, and have already managed to send some money in aid.

Simon commented: “We’ve started seeing a steady trickle come in. In the last two weeks, we’ve raised £400 and are looking forward to keep raising awareness about our efforts.

Simon and Marlon have set up a Facebook page, where you can find out more and donate.

Find out more about our courses here.