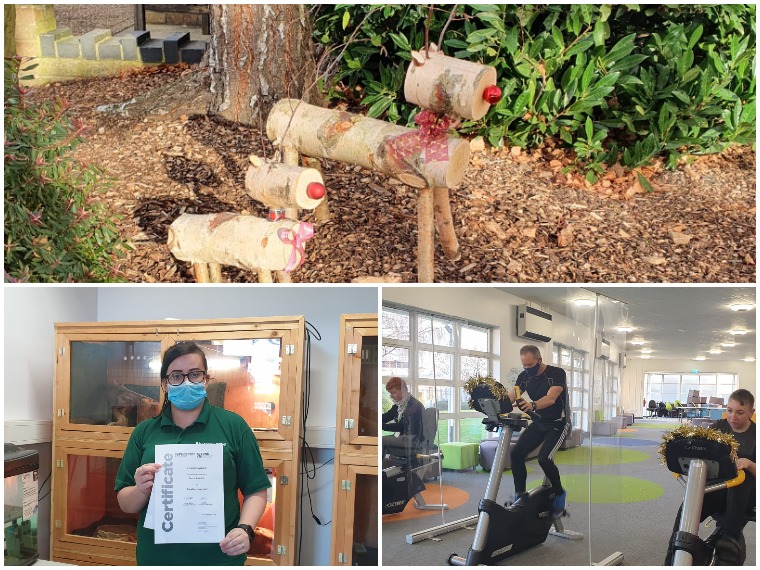 Our determined students and staff have put in tremendous festive feats of effort to raise money for key local charities through a variety of fun activities.

Our FLEX department has been busy crafting cute wooden families of reindeer, adorned with red baubles for noses!

Steve said: “We’ve made more than 100! The reindeers are for sale and we’ve sold most already, raising over £600 which we’ll be putting back into our department with art supplies so students don’t need to bring in their own as much. We’ll also be spending some of the money on providing a free Christmas lunch for our students.

“We’ve had a raffle too with prizes including a hamper, wine gift set and one of our crafted reindeers. £244.40 has been raised from this, with £100 going to Barnsley Independent Alzheimer’s and Dementia Support, £72 for Doncaster Housing for Young People and £72 for Speakup, a Rotherham-based self-advocacy charity for people with learning disabilities.”

The FLEX students were able to fully immerse themselves and take ownership by both helping craft the wooden reindeers and vote on which charities to raise money for.

Steve added: “It’s been a fantastic experience getting our students stuck in and they’ve really enjoyed it. With the popularity of them, we’ll have to start in March next year!”

Meanwhile, Animal Care has been ensuring a canine Christmas to remember whilst raising funds for a good cause. Level 3 Animal Management Emma Radcliffe won a Social Action award for her handy help in raising money for the animal welfare charity RSPB by preparing doggy hampers for sale.

Emma said: “Since I started studying at Dearne in September, there’s been plenty of opportunities for me to get stuck in helping care for a variety of animals.

“I was glad to help out for a good cause here too! It feels brilliant knowing that you’ve made some of our favourite furry friends’ Christmases that bit more special.”

Seeing Lapland this year may not be possible, but that’s not going to stop us! Our sporty students have also set the College a tall task of cycling the equivalent distance from Dearne Valley College to Lapland! The charitable challenge is raising money for Save the Children and has seen students and staff getting a sweat on racking up some impressive kilometres on some of our modern stationary gym exercise bikes.

Jack said: “It’s a nice thing to do. I don’t have to be in today but thought that this is for charity so wanted to get stuck in.”

Level 2 Public Services student Jay-Jay Ellis was one of the first learners to take part in pushing the pedals.

Jay-Jay said: “I’ve cycled over four kilometres and feel like I’ve done better than I could to be fair. It’s been fun and I hope this raises some good money for a good cause.”

Find out more about us here.