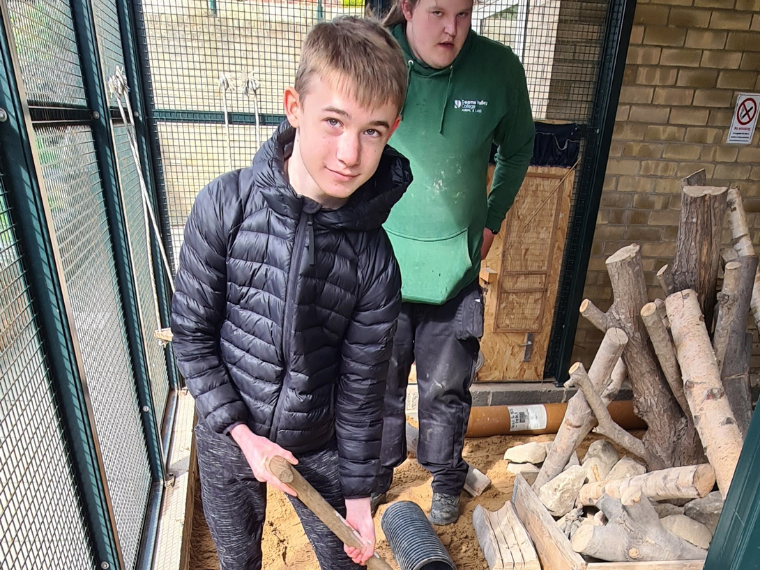 The world of work can be a very exciting one, depending on which industry you decide to enter you could be facing new challenges every single day. Nowhere is that a truer statement than when you work with animals.

Recently, Dearne Valley College had the pleasure of welcoming William from Eckington School to the campus. William spent a week working with our fantastic Animal Care and Land-Based teams at the College as part of his work experience.

Talking about his week at the College and what he enjoyed throughout the week, William said: “I started the week by looking after some of the animals, doing tasks such as cleaning the Axolotl tanks (Axolotls are a type of amphibious salamander, originally from Mexico) and putting fresh sand in the Meerkat enclosure.”

He continued: “I also prepared the food for the Guinea Pigs and other small mammals that the College has. After that, I helped out with the weekly health check for our Goats (named Salt and Billy) and the Alpacas (named Fernando, Magic and Earl Grey).

“Towards the end of the week, I prepared food for the reptiles, which was a bit different from preparing food for the small mammals as the reptiles eat live food like crickets. It was a little nerve-racking as I was just trying to concentrate on not dropping the box of crickets everywhere.”

William ended by talking about what enjoyed the most about his week at the College and commented on what future career he’d like to pursue.

He said: “I really enjoyed meeting and working with the Animal Care Team, and seeing all the different types of animals the College has is very interesting. In terms of my future career prospects, I’d like to do work with animals, something like a vet, although I know that takes a long time to qualify.”

Animal Care Tutors, Dan Pearson and Emma Radcliffe, who both worked closely with William during his time at the College, commented extremely positively on William, Dan said: “William was a great credit to himself and he showed the skills, attitude and work ethic that is needed to be successful in any career he chooses.

“Whilst with us, William took pride and consideration into all the tasks he completed, always being polite and caring throughout his time here. William has what it takes to be successful in anything he does and was a pleasure to have on work placement. We would happily have him back anytime.”

Emma added: “William is a great credit to the school and he showed us how hard-working he is. During his time with us, we spoke a lot about different careers that William would like to pursue. Every task he did he gave it 100%.”

She continued: “He loved spending time with our meerkats and giving them lots of enrichment activities to allow them to carry out normal behaviours. We wish that William could be with us for longer than a week as he fitted in so well with learners and the technician team.

“We wish William all the success in his exams that he has coming up.”